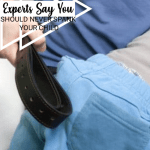 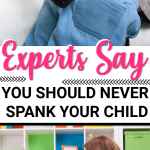 Spanking is something many of us grew up fearing. We learned to shape up or bend over the knee, it was as simple as that.

While the form of punishment has been slowly dying due to the social stigma attached to it, experts are now saying you should NEVER spank your child and they have science to back them up.

Experts Say You Should NEVER Spank Your Child

Parenting is tough and challenging.

Sometimes we just want to use the idea of spanking our child as a scare tactic without actually doing it.

However, with a recent study, experts are saying spanking (or even threatening with it) should never be an option and there are far better alternatives to disciplining your child.

Who are these experts exactly?

The experts consist of licensed pediatricians that form the American Academy of Pediatrics which is a go-to source for all things parent and child related.

According to the AAP, “new evidence suggests that researchers link corporal punishment to an increased risk of negative behavioral, cognitive, psychosocial, and emotional outcomes for children.” (Source)

The AAP reports that by 2012, more than half (51%) of the pediatricians surveyed responded that they discussed discipline in 75% to 100% of health supervision visits with parents of children ages 0 through 10 years.

The interesting thing is that the APP used to condone spanking as a positive way to discipline the child but as information and technology has advanced, they have since changed their stance on the matter.

This policy statement incorporates new research and updates the 1998 AAP clinical report titled “Guidance for Effective Discipline,” which suggested, “Parents should be encouraged and assisted in developing methods other than spanking in response to undesired behaviors.” (Source)

The Global Initiative to End all Corporal Punishment of Children provided a comprehensive definition of spanking and corporal punishment:

“The definition of corporal or physical punishment adopted by the Committee on the Rights of the Child in its General Comment No. 8 (2006) has the key reference point, ‘any punishment in which physical force issued and intended to cause some degree of pain or discomfort, however light.’ According to the committee, this mostly involves hitting (“smacking,” “slapping,” or “spanking”) children with the hand or with an implement (a whip, stick, belt, shoe, wooden spoon, or similar), but it can also involve, for example, kicking, shaking, or throwing children; scratching, pinching, biting, pulling hair, or boxing ears; forcing children to stay in uncomfortable positions; burning, scalding, or forced ingestion (for example, washing a child’s mouth out with soap or forcing them to swallow hot spices). Nonphysical forms of punishment that are cruel and degrading and thus incompatible with the convention include, for example, punishment which belittles, humiliates, denigrates, scapegoats, threatens, scares, or ridicules the child. In the view of the committee, corporal punishment is invariably degrading.”

The study concluded that consequences of these actions include:

None of these are what we intend to do when disciplining our children so, now that we know any sort of physical and verbal abuse is not the way to discipline our children, what can we do instead?

Discussing your child’s behavior with your pediatrician is a start.

Pediatricians are experts in child development and typically when a child is exhibiting behavior that requires discipline, it’s part of their development.

That is when pediatricians can give us parents solid advice on how to handle the situation.

Some other great resources include HealthyChildren.org (a website created for parents by the AAP) and the CDC also has articles regarding disciplining children.

What are your best tips for disciplining your child? I’d love to hear them!