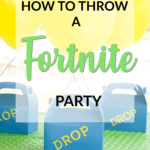 Kids everywhere are talking about Fortnite so it’s no surprise that you’re here to figure out How to Throw A Fortnite Party but not just any Fortnite party, one that is EPIC and causes your kid to floss dance in excitement. Am, I right?

Get ready because these Fortnite Party Ideas will make any kid feel like they just won the Battle Royale.

My son just turned 9 and what did he want as his party theme this year? Yup, you guessed it – Fortnite.

He had a blast helping me plan his party, make some DIY decorations and of course, ordering supplies.

Yes, parents, there are now Fortnite themed party supplies you can simply order and put up making our lives EASIER!

I say this because typically with new crazes, we don’t see party supplies for them for at least a year and by then, we’d have to DIY the entire party. Don’t get me wrong, I love a good DIY and party challenge but it can get costly and cause a bit of stress if things don’t go just right.

So, here’s my go-to #1 tip: buy what you can for the party and DIY everything else.

When I began putting together my son’s Fortnite party, I first visited Birthday In A Box which had “Battle Game” themed party supplies (they are totally Fortnite inspired).

I grabbed the cups, plates, napkins, tablecloths, balloons, helium tank and even a few things that I needed to DIY my own Fortnite Loot Boxes (we used these for party favors/goody bags).

Oh, and a Loot Lama Pinata – must have!

For party fun we had the Pinata filled with candy but we also had a ton of Nerf Guns and Ammo.

For the ammo, we ordered 300 Nerf darts so we had plenty at the party. We gave each kid a pack of them and brought all the Nerf guns we had around our home (yes, we have a lot).

These are just SOME of our Nerf Guns…

We then ensured the kids eyes were protected and had them wear these totally awesome camo sunglasses. We placed them inside a treasure chest box that served as a decoration too!

You could also add army men to the box and hand them out as party favors.

We had the party at our local park and the kids ran around for over an hour shooting each other with Nerf darts and totally had a blast. It was an easy and inexpensive party activity.

If you really wanted to make it extra fun, you could also build a DIY Nerf Target Board like the one below. We had planned to but ran out of time before the party.

As for food, our oldest son doesn’t like cakes or cupcakes. I had planned to get a custom Fortnite Cake made but he insisted on store bought sugar cookies so we did that.

Since we know kids that were coming had food allergies, we stuck with simple food: pizza and the kids seemed to be happy with it. Plus, it totally didn’t break the bank.

However, I loved the burger idea I saw on Pinterest.

For drinks, we totally made our popular Fortnite Slurp Juice. Seriously, it’s one of our most popular posts and everyone seems to love it!

Overall, our Fortnite Birthday party was a total blast or should I say, a total WIN. It is the perfect party theme for boys or girls especially if they love to play Fortnite.

Let us know what your favorite Fortnite party idea is!