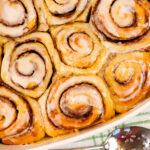 This Viral TikTok Cinnamon Rolls recipe uses a baking hack to make fluffy, moist, and perfectly cooked cinnamon rolls using just 2-ingredients. It is the sweet recipe everyone is talking about!

Cinnamon rolls make everything better and I’d argue, they are one of the best and easiest desserts to make.

Thanks to TikTok users, this food hack takes your favorite can of cinnamon rolls and turns them into a delicious treat worth drooling over.

You only need two ingredients and the result ends up tasting like a homemade fluffy cinnamon roll or even like a fresh Cinnabon. It is a simple recipe nearly anyone can make.

TikTok’s heavy cream cinnamon rolls is a viral TikTok trend we can get behind again and again!

What You Need to Make Monster Eye Jello Shots

How many servings does this recipe make?

Each can of Pillsbury Grands Cinnamon Rolls contains 5 cinnamon rolls. Therefore, this recipe will make 10 servings.

What goes with Cinnamon Rolls?

Cinnamon Rolls are more of a dessert but they can be enjoyed any time of the day including breakfast. Therefore, you can pair cinnamon rolls with coffee, milk, tea and even water. It can be eaten as a dessert, snack or even breakfast.

How far in advance can I make these?

I would make them right when you’re ready to eat them. They are best when they are freshly baked and warm straight from the oven.

Absolutely! Kids love cinnamon rolls (at least the ones I know do) and this is a perfect recipe for the kids given they don’t have any food allergies to any of the ingredients (please read all labels).

How to Make The Viral TikTok Cinnamon Rolls

Pop open the cans of cinnamon rolls and remove rolls. Set icing aside.

Place cinnamon rolls in a greased casserole dish arranging them so they are snug but not overlapping each other.

Pour heavy whipping cream over the top of each cinnamon roll.

Bake for 30 minutes and remove from oven.

Top each cinnamon roll with the cream cheese icing.

As an Amazon Associate and member of other affiliate programs, I earn from qualifying purchases.

*Nutrition facts are an estimate and not guaranteed to be accurate. Please consult with a registered dietitian for dietary advice. You may read our Nutritional Disclaimer here: https://www.simplisticallyliving.com/nutritional-disclaimer/

Did you make this recipe?

My name is Brittanie and I am a mom of 3 that is on a mission to Live Simply while enjoying every aspect of life to the fullest. Join me for easy recipes, fun crafts and lots of laughs. Oh and mint, I love mint! Read More
Skip to Recipe